A Sheriff is arrested for upholding Second Amendment. 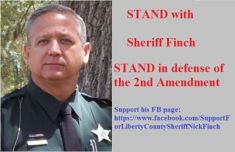 In Florida, sixty-seven sheriffs signed one of those pledges declaring they would uphold the Second Amendment and defend Americans’ right to bear arms. This decision didn’t fare so well for Sheriff Nicholas Finch, who was arrested in early March by FL Governor Rick Scott for upholding the Second Amendment. Governor Scott has appointed Carl Causey as sheriff to replaced Finch until the case is heard in July. Here’s a little background to the story.
The charge against the sheriff stems from an incident involving his deputy, James Hoagland.
On March 8, Sgt. James Hoagland arrested a man named Floyd Parrish for carrying a fully loaded concealed semi-automatic weapon.  When Sheriff Finch walked on the scene, he was accompanied by one of Parrish’s family members. After investigating the situation, Finch took Parrish’s arrest file and released Parrish and his gun.  The sheriff then destroyed all documentation related to Parrish’s arrest.  Several days later, Hoagland asked Finch about the incident. He responded by saying he believes in, “Second Amendment rights.”
It wasn’t long afterwards that Sheriff. Finch was arrested, according to the Independent Sentinel for a “Third-Degree Felony charge of official misconduct for destroying or removing official documents from the county jail to cover up the arrest of Mr. Parrish. Finch was released on his own recognizance.”
Finch’s lawyer, Jimmy Judkins, released this statement to the Independent Sentinel:
”The records at the jail show exactly what happened in this case and the records speak the truth. The sheriff looked at the facts and said, ‘I believe in the second amendment and we’re not going to charge him.’ That is not misconduct at all. That is within the sheriff’s prerogative whether to charge someone or not.”
Many believe, according to the Independent Sentinel, that all actions taken by the sheriff were within his authority. As a sheriff, he had the authority to decide whether or not to charge Parish for having a firearm in his possession. Since Parrish was not charged, the arrest records are not of any value to Finch who, therefore, had a right to destroy those records.
Any yet, Finch was still arrested and charged with third-degree felony offenses.
What do you think?

I am a Christian entrepreneur writer, passionate about Jesus Christ and His Grace message. Politically straight up conservative/libertarian completely sold out to the original founding principles of America as articulated by our founding fathers. I'm a writer anxious to express my heartfelt opinions about our changing world and the spiritual/political war against our children's souls. END_OF_DOCUMENT_TOKEN_TO_BE_REPLACED
This entry was posted on Monday, June 10th, 2013 at 9:26 pm and tagged with 2nd amendment, Gun rights, micromanagement, second amendment, United States Constitution and posted in Uncategorized. You can follow any responses to this entry through the RSS 2.0 feed.
« Pick Which Obama Administration Scandal is Racist?
Biden: Al Gore was elected President of the United States »

One response to “A Sheriff is arrested for upholding Second Amendment.”